We all love the charm of St Valentine’s Day – the anonymous love letters, the red hearts, the romantic dinners, the chocolate gifts… but do you actually know who Saint Valentine was, what did he do, where can you find him and what does he have to do with love?

Here is the answer – Saint Valentine was a Roman saint and martyr who lived in third century AD. The only historically certain fact is that he was killed on 14 February most likely in the year 269 (might have been a year or two later) and that he was buried on the outskirts of Rome along the famous via Flamina road.

The rest of his life is legendary. He was supposed to be a bishop of Narnia (the one in Umbria in Central Italy, not the one from the “Chronicles of Narnia”). As in those days promoting Christianity was punishable by Roman law, he got arrested by a judge named Asterius. Valentine, as most priests do, started to discuss the Christian faith with the judge. Judge Asterius put Valentine to test and brought him his own adopted blind daughter. If Valentinus succeeded in restoring the girl’s sight, Asterius would do whatever Valentinus asked.

Valentinus laid his hands on her eyes and the child’s vision was restored. Immediately humbled, the judge followed the requests of the bishop. He broke all the idols in his house, fasted for three days and became baptized, along with his family and entire 44 members of his household. The now faithful judge then freed all of his Christian inmates.

Valentinus was later arrested again for continuing to proselytize. He was sent to the prefect of Rome, to Emperor Claudius Gothicus (Claudius II) himself. Surprisingly Claudius liked Valentine and decided not to punish him. However when Valentinus tried to convince Claudius to embrace Christianity, the Emperor refused and condemned him to death. The Emperor commanded that Valentinus either renounce his faith or would be beaten with clubs and beheaded. Valentinus refused and Claudius’ command was executed outside the Flaminian Gate February 14, 269.

Where can you meet Saint Valentine? As in case of most of the saints, he is quite dispersed around the globe.

Ok – but what has this to do with love? Absolutely nothing. For centuries Saint Valentine was not associated with love at all.

1000 years have passed and Europe changed a lot. In the Middle Ages, it was believed that birds paired and fell in love mid-February. Mid February is exactly on 14 February. And 14 February was the day of Saint Valentine. Hence the connection.

That’s when the first legends including love, romance and Saint Valentine started. In England in the 18th century they were amplified by various poets and the tradition was brought to America. Two centuries later we have a world craze of love and romance on 14 February and we praise for that a man who had no idea that he will be thanked for something he had nothing to do with.

So – where can you meet Saint Valentine? As in case of most of the saints, he is quite dispersed around the globe. Most of his skull is in Rome. Other parts are in Madrid, Dublin, Krakow, Prague, Vienna, Glasgow, Chelmno, Malta, Roquemaure and a few other places.

One of the places you can find him is St. Florian’s church in Krakow, Poland. It is one of the oldest churches in Krakow, as it was built in 1184. Even though it is situated just next to the old town, many tourists never reach it.

Due its crucial location at the begining of the Royal Route, the church became very important and managed to acquire the relics of Saint Valentine. Unfortunately they are currently not on public display but that might change if more and more worshippers demand it.

So – if you are desperately looking for love and you do not know what to do on 14 February – why not visit Saint Valentine himself?

You can find more information on Saint Valentine on a number of Catholic and other religious websites. The church of St Florian has unfortunately a webpage in Polish only. 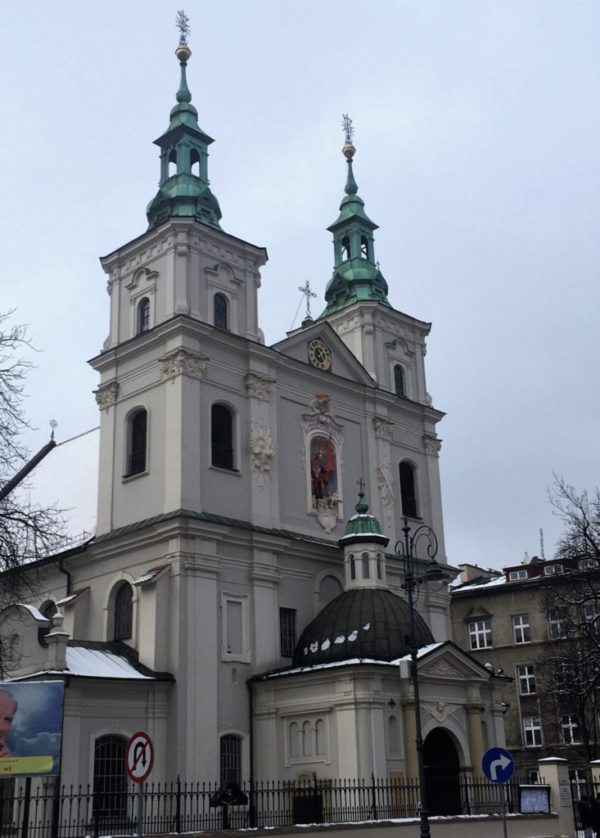 The church of Saint Florian in Krakow - view from outside 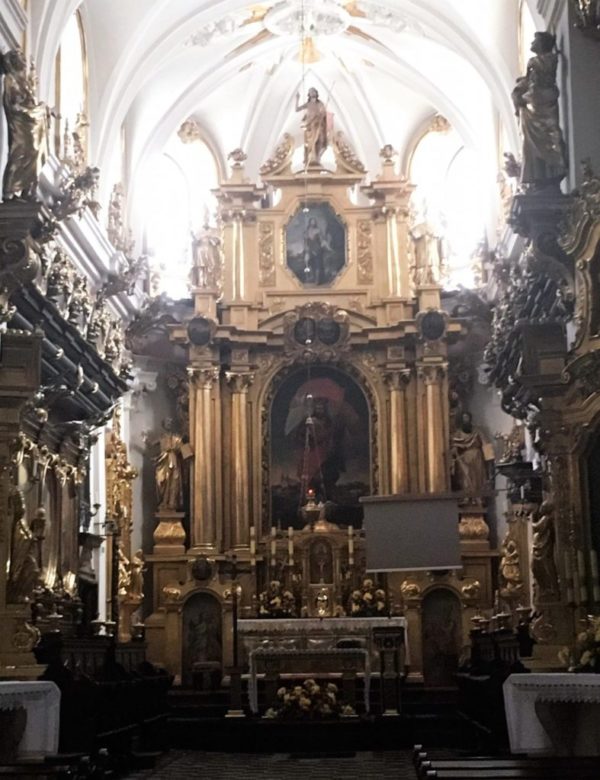 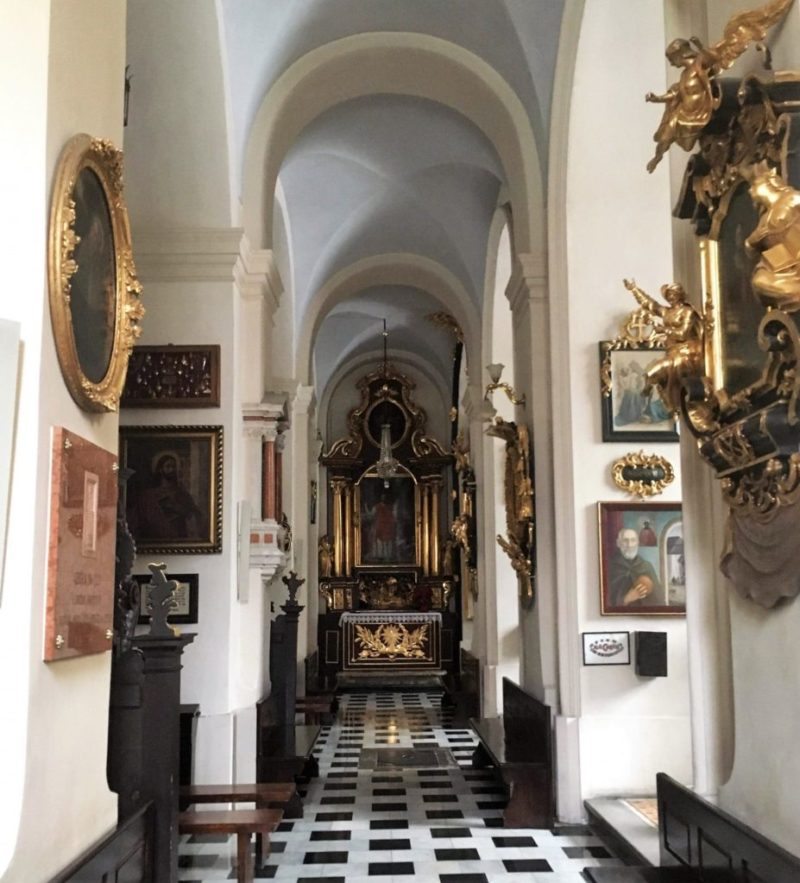 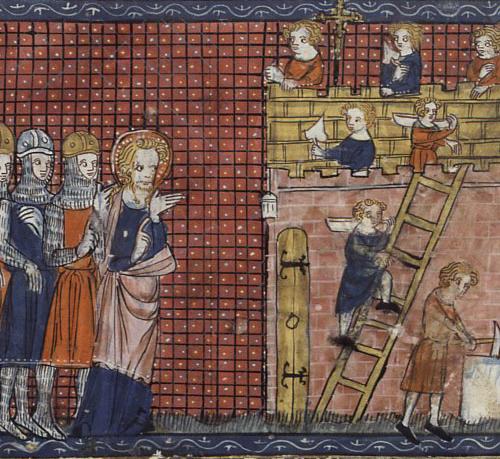 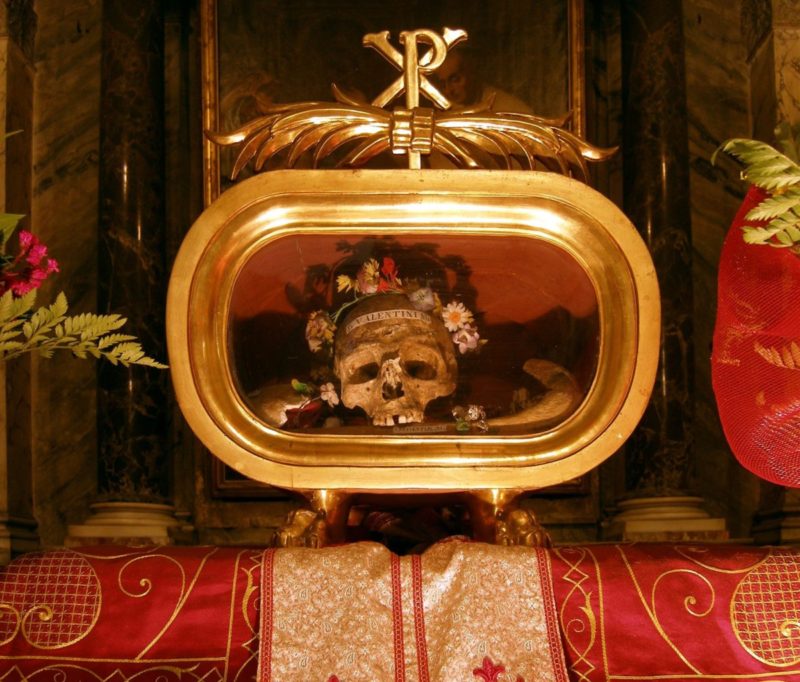