One of the architectural icons of the Western world never ceases to impress. The Rietveld Schröder House, situated in a green residential area of the Dutch city of Utrecht looks like a toy house in juxtaposition to surrounding terraced houses. What is so different about this relatively small, colourful simple house that was so revolutionary?

There is a woman behind the story

Truss Schräder was born in a middle-class traditional Utrecht family. She was expected to get proper education and to marry. And so she did. But she was also an independent woman with strong views and ideas. She didn’t feel too comfortable in a vast house with high ceilings where she lived with her husband, a lawyer Frits Schröder. Therefore she decided to employ local furniture designer Gerrit Rietveld to redecorate one of the rooms according to her own, modern taste.

After early death of her husband she was looking for a new, smaller, modern and simple accommodation for herself and her three children. As she was unable to find it, she decided to commission it herself. She employed Rietveld once again and that’s how the famous house came to life. Truss rejected the first project. She wanted her house to have more open space and simplicity than even the architect could think of at that time. For Rietveld, the furniture-maker, the commission to build this house opened a possibility to make his dream to become an architect come true.

The House (1924) was constructed according to the rules of De Stijl movement. Few years earlier, Rietveld displayed his famous Red-Blue Chair, one of the icons of world design. Just like in furniture, experimenting with space, forms and colours was crucial in Rietveld’s architecture. The facade is nearly abstract collage of horizontal and vertical forms. The colours were carefully chosen to highlight particular elements of the composition. The roof is flat, which was very unusual at that time. The ground floor may seem traditional with its kitchen, maiden’s room and study, but in fact every room has its own entrance as independence and openness was very important for Schröder and Rietveld alike.

The upper floor is provided with a revolutionary system of sliding walls, which can transform the space into a divided area of bedrooms or an open space depending on what was needed. Ms. Schröder-Schräder was using this system daily. Many pieces of practical furniture were designed especially for the interior. When the House was built at the end of the street, this meant also the end of the town. Further were typical Dutch polders – fields keeping the land at sea level from flooding. This gave the luxury of an extensive view from the windows situated on three sides.

This changed radically the view, which has always been an important part of the project. The deeply upset architect considered the best solution would be to destroy his most famous work. Luckily it never happened. Today the trees provide the green scenery around the house and make the situation bearable, but one can imagine what a disaster it must have been years ago. The viaduct cut off the Rietveld Schröder House from the rest of the street, with other works of the architect, which were built in the meantime. However, years passed and nowadays the underpass of the viaduct is mainly for cyclists and the artists Eline Jansses and Margot Berkman decorated it with ceramic tiles inspired by Rietveld’s chair designs (2001).

” I didn’t expect this honour as I have always been something of a pirate in the architectural world “  Gerrit Rietveld at the ceremony of awarding him a Honorary Doctorate at Delft Polytechnic, 1964

As years passed, the modernist movement became extremely popular and influential. Europe was ravaged by WWII and rebuilt, the children grew up and moved out, her partner and friend Gerrit Rietveld passed away but she still lived in the colourful house at Prins Hendriklaan 50 in Utrecht. When Ms. Schröder-Schräder died in 1985 her house was already a listed monument. Her daughter Han became an interior designer and architect, one of the very first women with this occupation registered in the Netherlands. Later in her life she emigrated to the US where she became an university professor and educator. Together with Bertus Mulder, an architect previously working with Gerrit Rietveld, she conducted a renovation of the house to become a museum open for visitors. Since 2000 the house is a UNESCO World Heritage Site.

I visited this place once before

As a student of the Art History Faculty of the Warsaw University, I went on a tour dedicated to icons and milestones of Dutch architecture. I admired the Rietveld Schröder House, but was so overwhelmed by the revolutionary style of the building, particularly in comparison to other dwellings along the calm, residential street, that I hardly paid attention to how it could operate on a daily basis. Now, having my own household and children, I admired the courage and revolutionary attitude of a woman who preferred visionary, ultra simple avant-garde architecture to the comfortable middle-class traditional accommodation. She loved the house and was happy here. At the end of his life Gerrit Rietveld also lived in the House and had his studio at the ground level.

Named after Prince Consort of the Netherlands who was the husband of the Dutch Queen Wilhelmina, it is a lovely avenue with quiet Dutch terraced houses and cafes. Rietveld Schröder House remains the main attraction of the street, welcoming architecture admirers from all over the world, but they are other highlights, too. Almost one kilometer long street begins with the Wilhelminapark and ends up with another two blocks of dwellings by Gerrit Rietveld built with the collaboration of Truus Schröder-Schräder (Prins Hendriklaan 64 along with the side street Erasmuslaan 1-11). Walking back towards the park we found a great cafe making their own bio ice creams – Ijssalon Vorst. The best ice-creams I had since a long time!

If you liked our post, let others discover Rietveld Schroder House! Pin it! 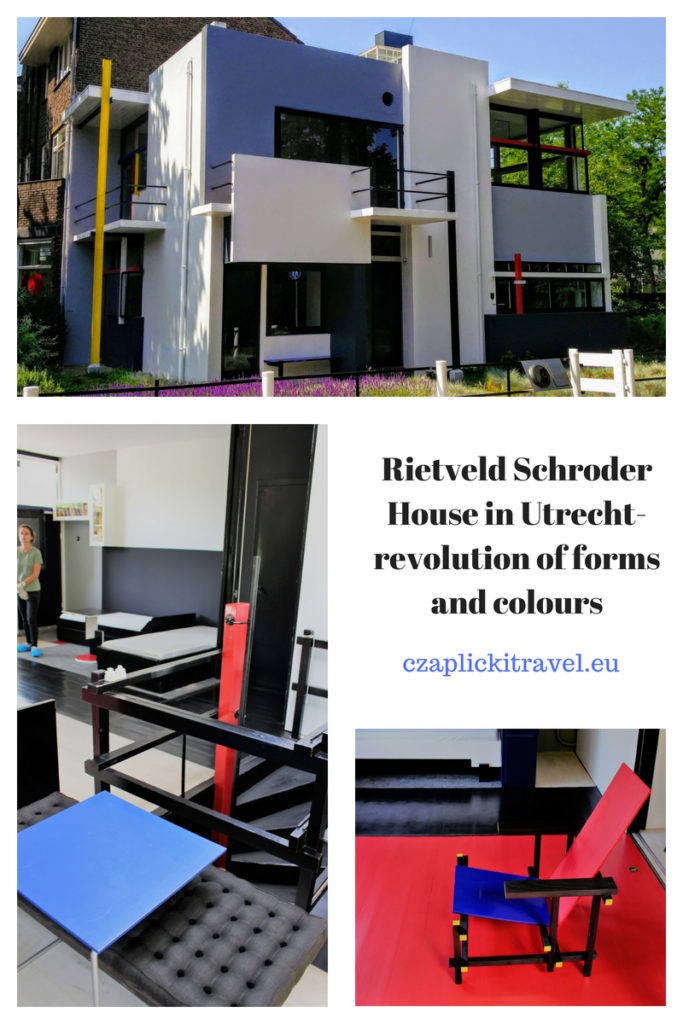 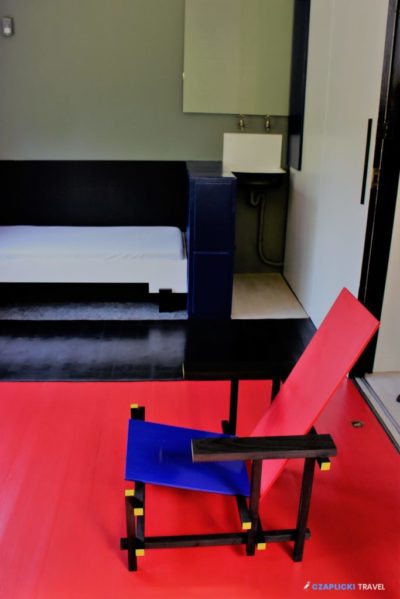 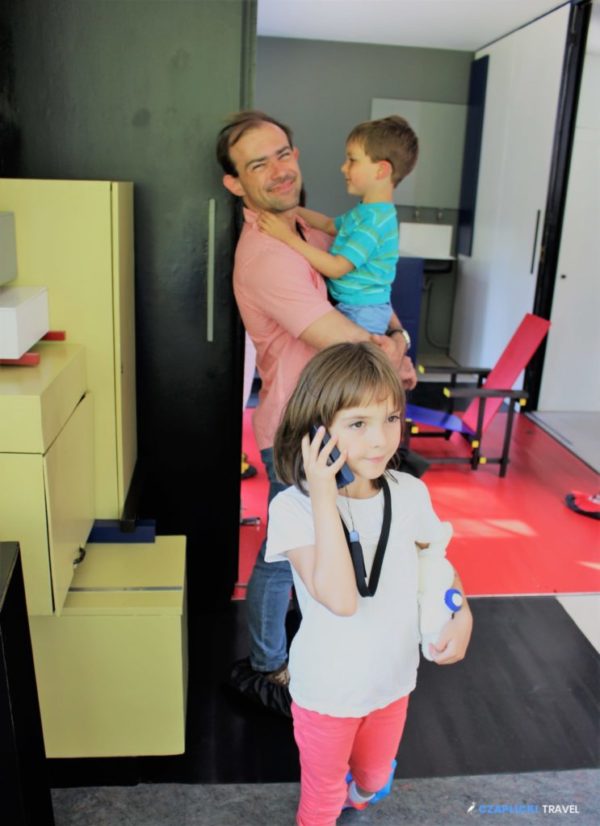 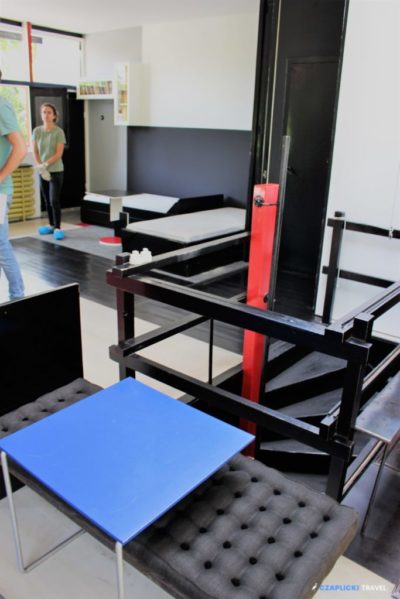 The staircase and the open space 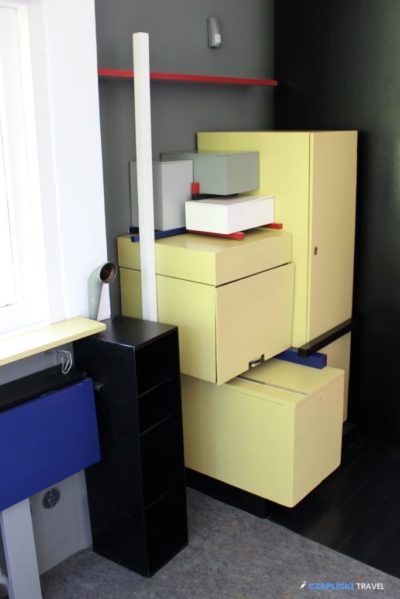 Gerrit Rietveld was first of all a trained furniture designer 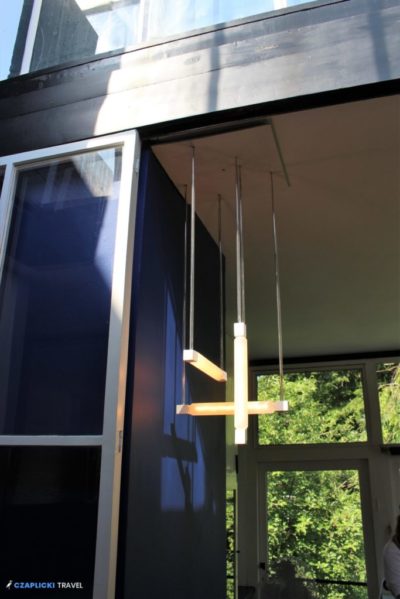 Details of the interior 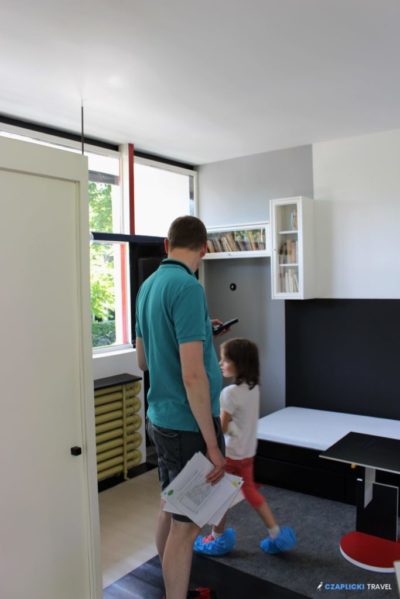 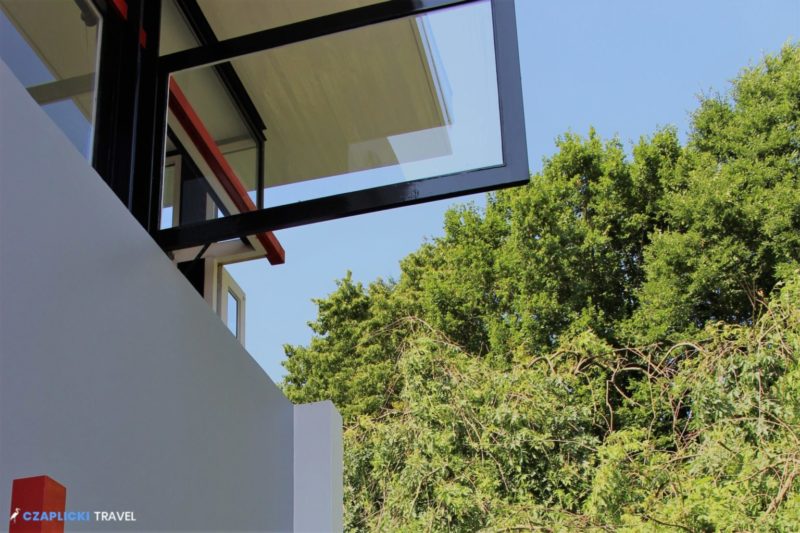 The window opens to the outside 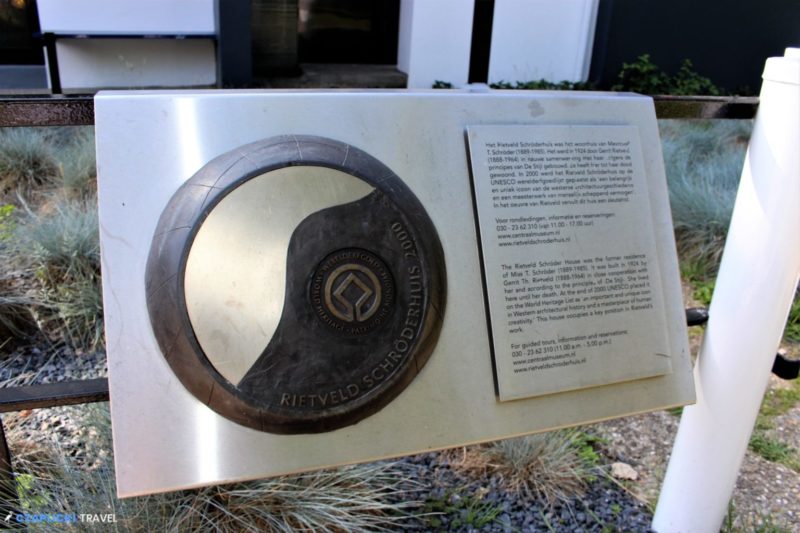 The House is on UNESCO World Heritage Site list since 2000. 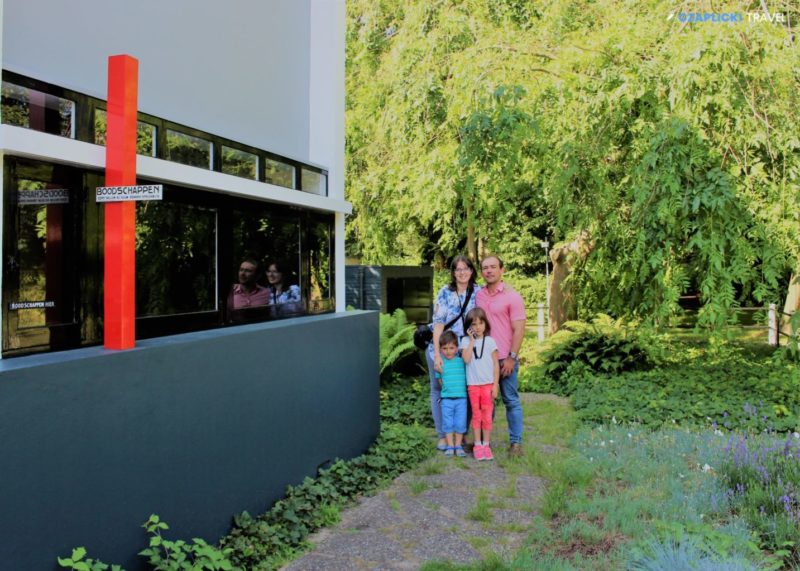 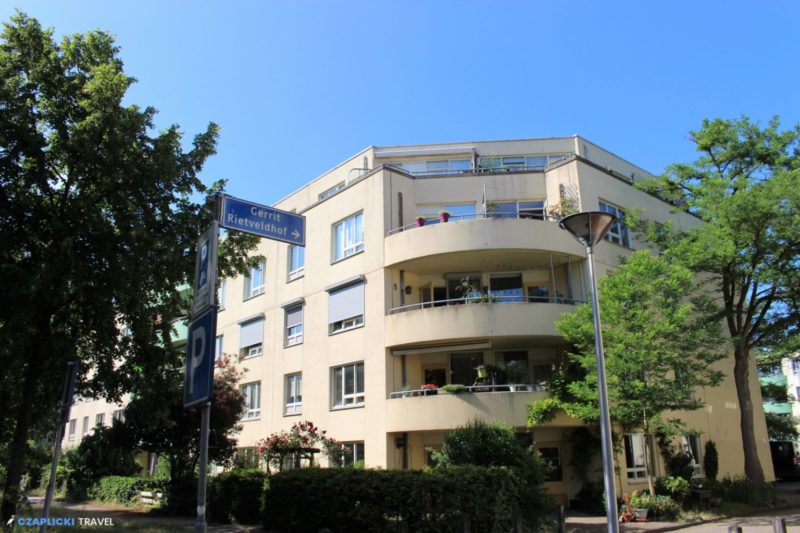 Gerrit Rietveld's heritage is visible in many places along the street 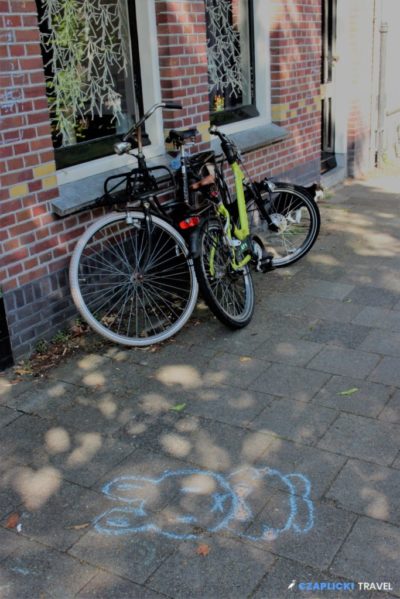 Utrecht is a birthplace of nintje (known also as Miffy) - a famous cartoon bunny. In fact its simple graphics was also inspired by De Stijl movement. 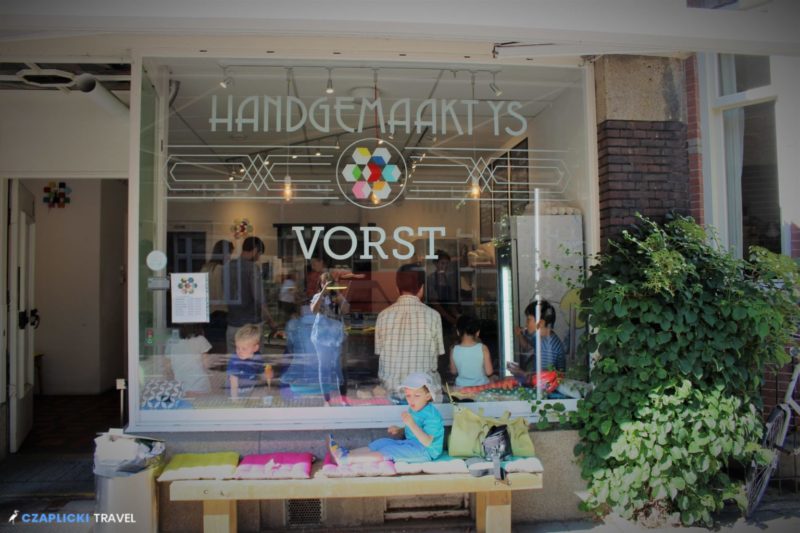 Gerrit T. Rietveld (1888-1964) was born and lived in Utrecht his whole life. He received many commissions in the town and vicinity. To discover more of his work and Dutch modern architecture, we can recommend you the following publications:

Due to limited space and huge interest visiting Rietveld Schröder House is only possible by earlier booking. The House is the care of Centraal Museum Utrecht. For all practical information and booking visit the website of the Museum.