Once upon a time there stood a proud castle showing the prestige of one of the most powerful families of Britain. The most luxurious and sumptuous palace in Wales. It was called Raglan castle. It belonged to two families loyal to the British monarch from generation to generation.

And yet it had to pay the price for that loyalty. In 1640 Raglan was a splendid place to live with lush gardens, modern infrastructure and kitchen renowned all around Albion. Five years later it was a looted and uninhabited ruin. How did it happen?

Well, if you want to know how did it come to that, let’s start from the beginning of the story.

Six hundred years ago there lived a man called Sir William ap Thomas who was the fifth son of a minor Welsh gentry family. He wasn’t well connected, but he was ambitious. He climbed the career ladder well, was knighted by king Henry VI and was known as the Blue knight of Gwent. William married a rich widow of a wealthy family and became an owner of the manor of Raglan.

Sir William ap Thomas died in London in 1445 and was succeed by his eldest son William who took the surname of Herbert. His career was to be even greater than his fathers.

During the war of roses William Herbert stood on the side of the York family and thanks to Williams’ troops Edward of York won the battle of Mortimer’s Cross and ascended to the throne as Edward IV.
King Edward in return nominated William as Chief Justice and chamberlain of South Wales. William continued the pro-York campaign in northern Wales and managed to capture Harlech Castle. The king rewarded him with the title of Earl of Pembroke. He became thus the first Welshman to enter into the ranks of the English nobility.

While fighting for the Yorks, William captured also Pembroke Castle. He found there a young boy named Henry Tywd. He was an orphan but he was very rich and quite well connected, as he was the half brother to the previous king. William decided to take him to Raglan as his half-guest, half-prisoner. They boy lived here for a big art of his childhood, until the death of William. He was later known as king Henry VII, the founder of the Tudor dynasty and the father of the famous Henry VIII.

Thanks to his position and wealth William significantly rebuilt and remodelled Raglan. Most of which exists today comes from that period. He added a magnificent new gatehouse and added splendid interiors. He added a chapel and remodelled the Great Tower. His new residence was equal to any other magnate in the land.

He was not however to cherish his wealth for long. He lost the battle of Edgecote in 1469, was captured and executed. The castle passed to his son William (yet another one).

With the execution of William, the golden era of the Herbert family ended. William III had no son, and the castle passed on to his daughter Catherine, who married Henry Somerset.

That is how the Somerset family got into possession of Raglan. Thanks to them the castle entered a second golden era. They added a long gallery to Raglan, which was typical for the Renaissance palaces. What was however less typical is that they placed it on the second floor.

They also expanded the gardens including a French geometric garden and water structures including a huge pond. They also added a collection of ancient Roman statues which were to add splendour to the garden.

Last but not least, they added a unique fountain which was springing water from the moat next to the Grand Tower. The fountain sprung the water up to the top of the Tower. In order to achieve it a special steam engine was invented. It was the first time in modern history that a steam engine was used as a motor for any kind of a machine. Two centuries later, not far away from Raglan, another invention, John Stevenson, discovered that a steam engine can move a vehicle and thus invented the locomotive.
The palace was thus a place of splendour and pride of its owners. It’s balls were refine, its cuisine known far and away.

Henry Somerset was a sturdy royalist who stood on the side of King Charles I when the Civil War began. After the royalists lost the battle of Naseby, the parliamentarian army approached Raglan.
It was well prepared for siege with 400 infantry and a significant amount of cannons. The siege lasted for 7 weeks. However, when the parliamentarians brought the huge Roaring Meg cannon, the marquis understood that further resistance is futile and surrendered the castle.
Raglan was confiscated by the parliament and given to Oliver Cromwell. It was decided that it will be partially demolished so that it will not be able to stand against the will of the parliament again.
The Great Tower was nearly impossible to dismantle, so the destructors dug underneath it, so that part of the Tower collapsed into the moat creating the form we can see today.

The scale of the castle is so huge, that even after having been besieged, looted and partly destructed, it is still huge, majestic and imposing. The vastness of the complex shows just how huge and splendid the original palace had been. When you wonder through the courtyards and when you climb the towers you can imagine that this palace was certainly a great place to live.

It is certainly one of the castles worth visiting while in Wales. Come here and you won’t regret it.

*the ilustration depicting how Raglan looked like before the Civil War which you can see in the top of this post is by Ivan Lapper (2003). It depicts Raglan about 1620 and shows the castle and its gardens in their heyday.

Not farre from thence, a famous Castle fine,

Made of Freestone, upright as straight as line,

Whose workmanship, in beautie doth abound.

The curious knots, wrought all with edged toole,

The stately Tower, that lookes ore Pond and Poole:

The Fountaine trim, that runs both day and night,

Doth yeeld in showe, a rare and noble sight.

We can certainly recommend you the Cadw publication on “Raglan Castle” by John R. Kenyon which has both splendid pictures and historic reproductions and a rich and detailed text about the castle.

For practical information visit also the Cadw website of Raglan. 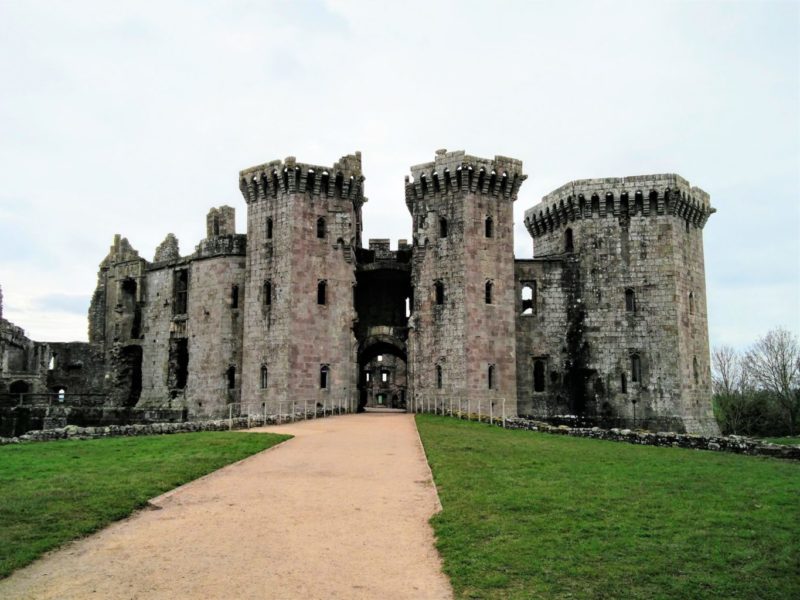 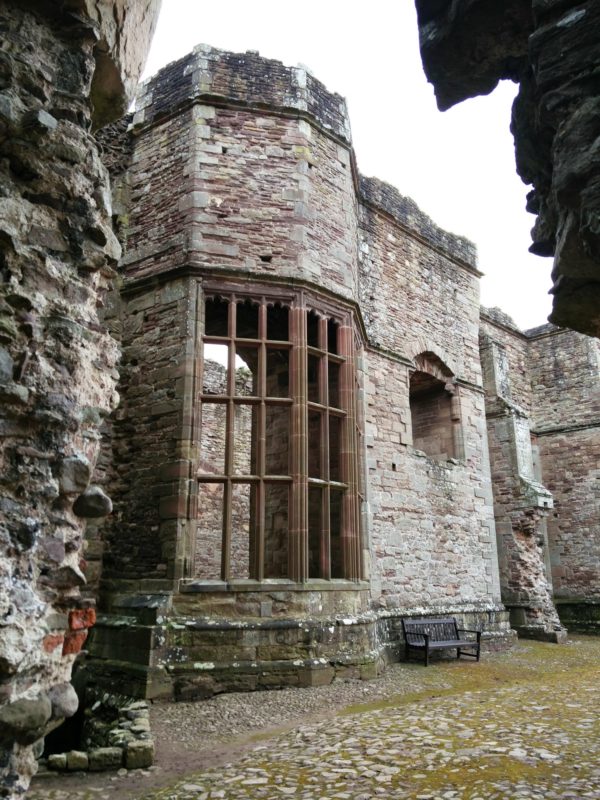 It was a marvelous gem of renaissance 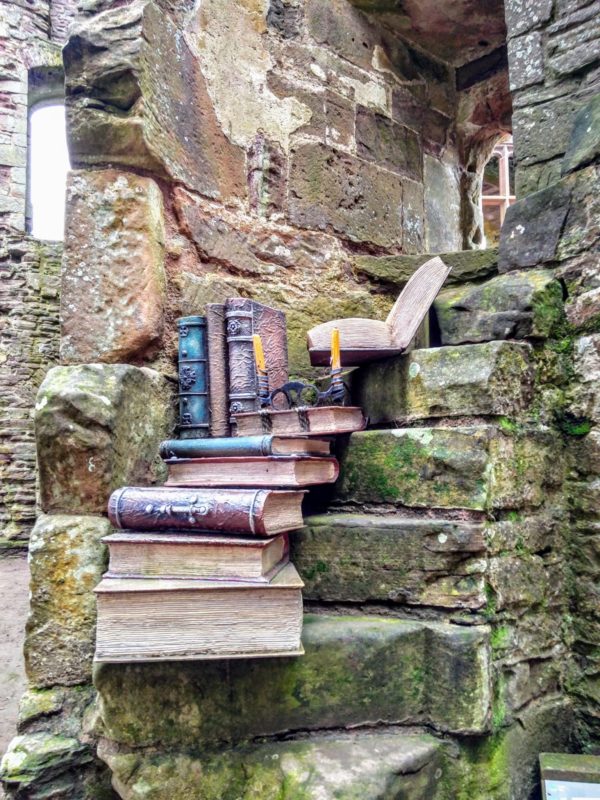 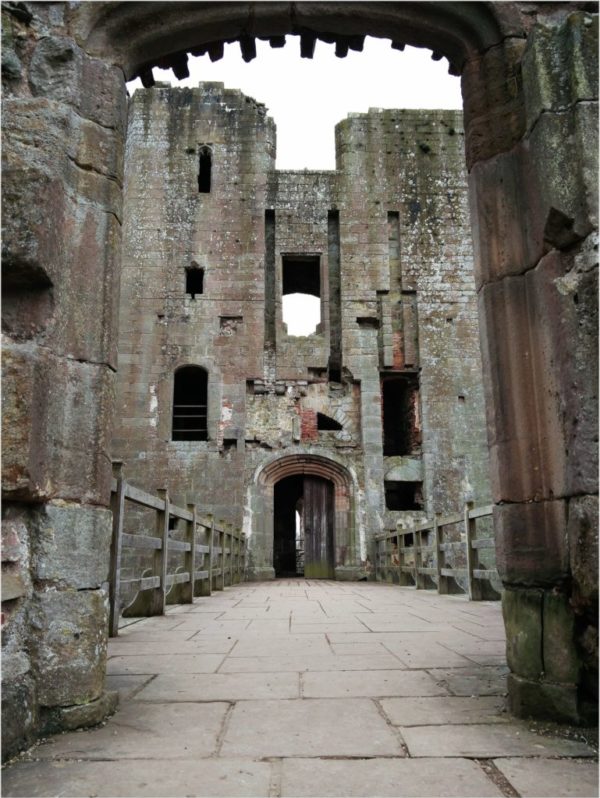 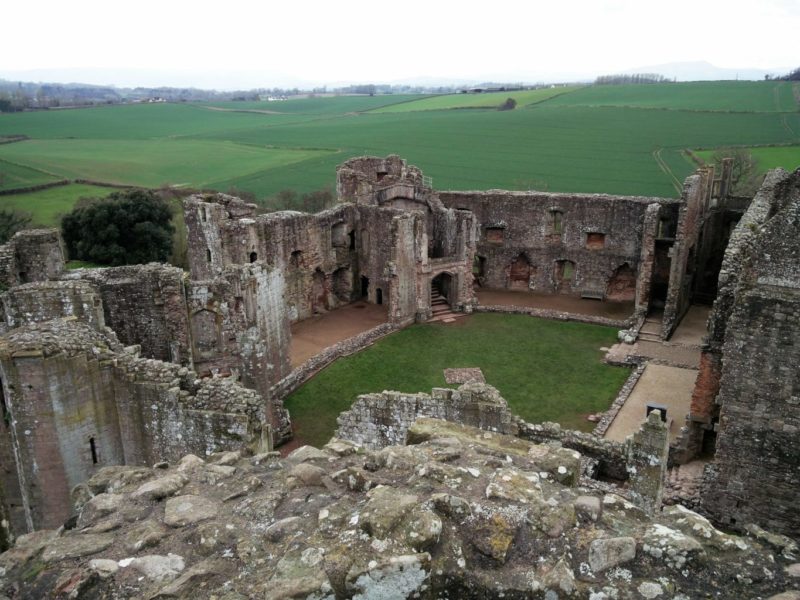 The emerald fields of Wales spread around the castle 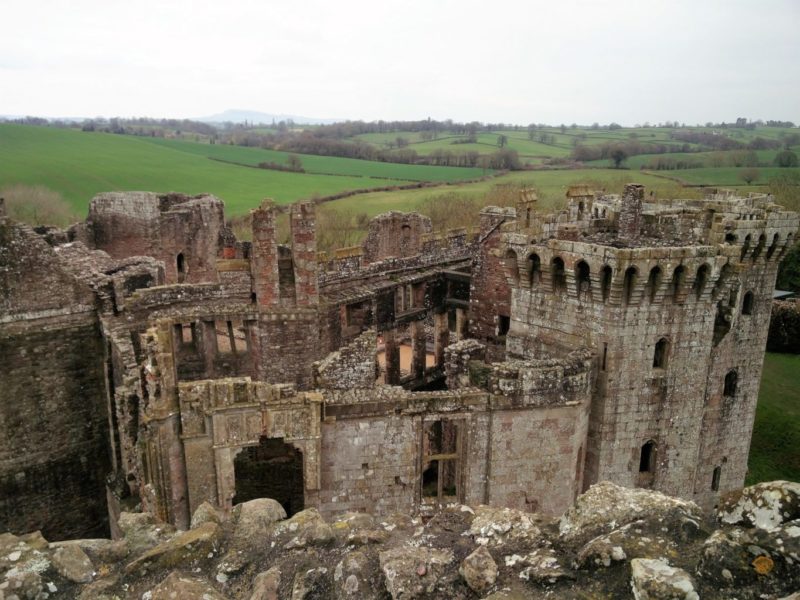 View from the top of the Great Tower 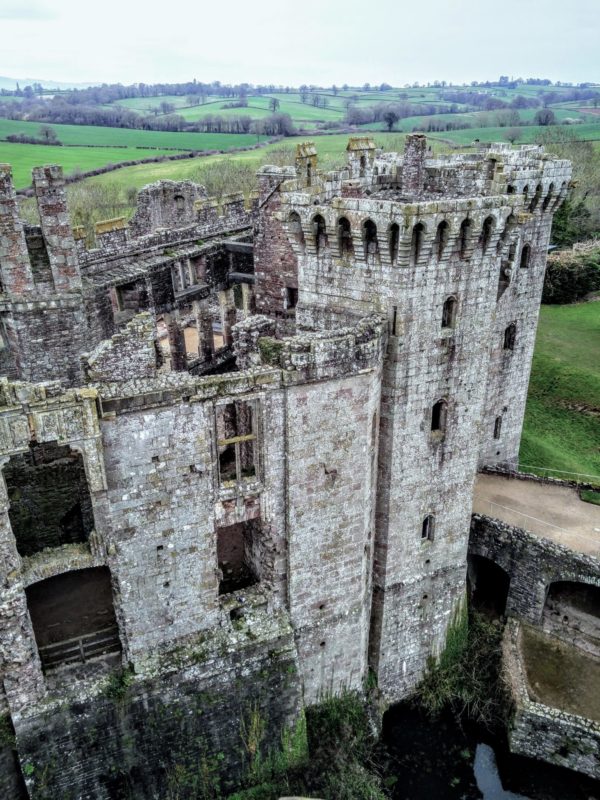 Southern gate as seen from the top of the Great Tower 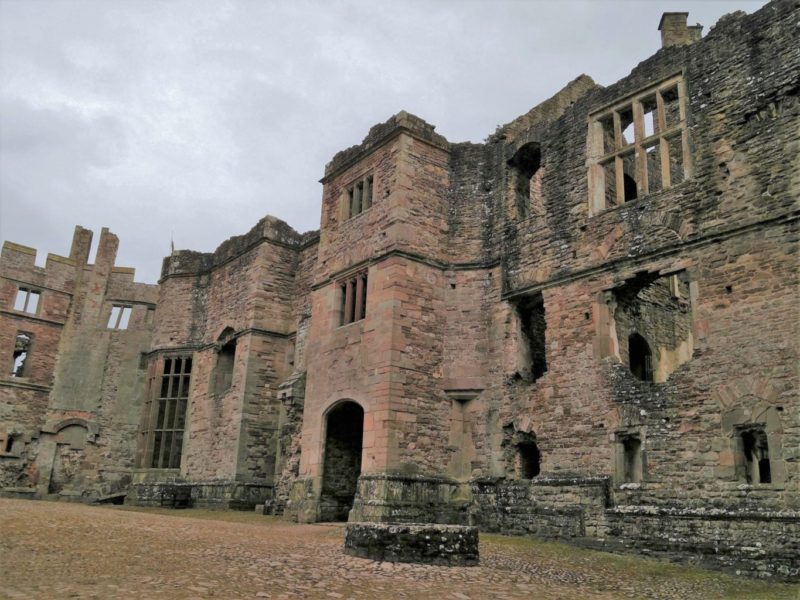 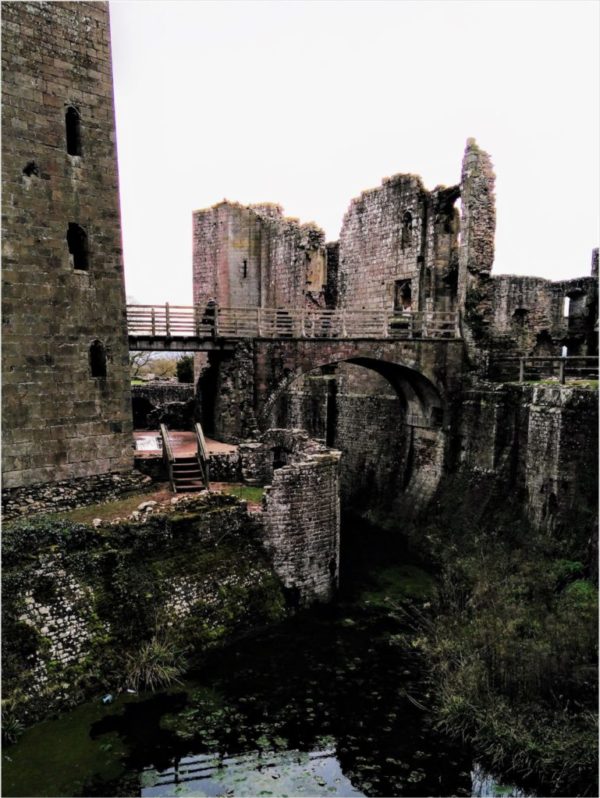 The moat connecting the castle and the Great Tower 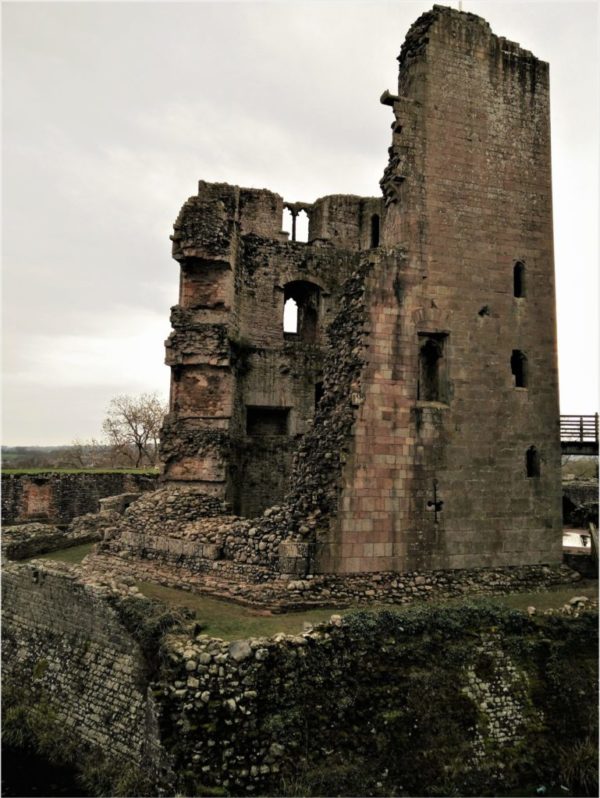 It wasn't easy to destroy such a powerful structure
Map