Everybody loves pizza. It is a common knowledge that it comes from Italy, but it is less known that pizza originated in Naples. But how actually did it come into being, what are the most famous pizzas and which ingredients are used in them? Which are the oldest and the most famous pizzerias in Naples?

The history of Pizza

The ancient Romans were eating focacias, which are considered ancestors of modern pizzas. They were made of yeast dough and topped with cheese and olive oil. Tomatoes where unknown in Europe in those times and only arrived after the discovery of America.

The word “pizza” most likely derives from the late Latin or Greek word “pitta” which means “flatbread”. It was first used in 997 AD in the central Italian town of Gaeta, where a tenant of certain property was to give the bishop of Gaeta duodecim pizze (“twelve pizzas”) every Christmas Day, and another twelve every Easter Sunday.

Modern pizza evolved from flatbread in Naples in the 18th or early 19th century. It is uncertain when and how tomatoes were added to it for the first time. It is however known that a first seed of San Marzano tomato was sent to Naples in 1770 as a gift from the Viceroyalty of Peru to the Kingdom of Naples (both Naples and Peru belonged to the Spanish Bourbons in those days), and that it was planted in the area of San Marzano sul Sarno on the slopes of Mount Vesuvius (hence the name). Until about 1830, pizza was sold from open-air stands and out of pizza bakeries, and Neapolitan pizzerias keep this old tradition alive today. It was considered as food for the poor.

Pizza Margherita – the most famous pizza in the world

According to a popular legend, the new sovereigns of Italy visited Naples in 1889 for the Reclamation of the City. Queen Margherita of Savoy was fed up with the French gourmet food which was the typical court food of that time. She stated that she would like to try a typical Neapolitan dish of the poor people.

The Capodimonte Palace summoned the most known pizzaiolo  – Raffaele Esposito – to prepare three different pizzas for the Queen. She did not like the one with garlic (pizza marinara) or anchovies (pizza Napoli), but she loved the pizza with tomato sauce, mozzarella and a spring of basil. Esposito immediately named his invention after the Queen and asked only to put the royal seal on his pizzeria. A few days later she had her chamberlain send Esposito a thank-you note.  It hangs to this day on the wall of the Pizzeria Brandi, which his descendants still own.

Authentic Neapolitan pizza is typically made with San Marzano tomatoes, grown on the volcanic plains south of Mount Vesuvius, and mozzarella di bufala Campana, made with milk from water buffalo raised in the marshlands of Campania and Lazio regions.

Other traditional pizzas include pizza alla marinara. It is even older than the margherita. The marinara has a topping of tomato, oregano, garlic, and extra virgin olive oil. It is named “marinara” because it was traditionally the food prepared by “la marinara”, the seaman’s wife, for her seafaring husband when he returned from fishing trips in the Bay of Naples.

Pizza capricciosa is prepared with mozzarella cheese, baked ham, mushroom, artichoke and tomato. This pizza was invented by Enea Dante Santerini, the owner of the restaurant La Capricciosa in Via del Corso, Rome. The Santerini Family still has the corporate patent registered on 29th November 1952.

Pizza pugliese is prepared with tomato, mozzarella and onions. It is named after the Italian region of Apulia.

A famous pizza in the old days here would be the pizza mastunicola, which was topped with sheep’s cheese, lard, and some basil. It is rare to find these days. It was named after a certain Maestro Nicola and can be still found in the menu of the Antica Pizzeria Port’Alba.

“Associazione Verace Pizza Napoletana” (“True Neapolitan Pizza Association”), which was founded in 1984, has set the very specific rules that must be followed for an authentic Neapolitan pizza. These include that the pizza must be baked in a wood-fired, domed oven. The base must be hand-kneaded and must not be rolled with a pin or prepared by any mechanical means. I pizzaioli—the pizza makers—make the pizza by rolling it with their fingers. Additionally the pizza must not exceed 35 centimetres in diameter or be more than one-third of a centimetre thick at the centre.

As we stayed in the vicinity of Naples for two weeks, we had the ocasion to try one of the most known and oldest pizzerias in Naples.

First established in 1738 as a stand for peddlers, Antica Pizzeria Port’Alba was opened in 1830 in the town center at Via Port’Alba 18. The restaurant replaced street vendors who would make pizza in wood-fired ovens and bring it onto the street, keeping it warm in small tin stoves they balanced on their head. It soon became a prominent meeting place for men in the street. Most patrons were artists, students, or others with very little money, so the pizzas made were generally simple, with toppings such as oil and garlic. A payment system, called pizza a otto, was developed that allowed customers to pay up to eight days after their meal. A resulting local joke was that a meal from Port’Alba might be someone’s last free meal, if they died before they paid. 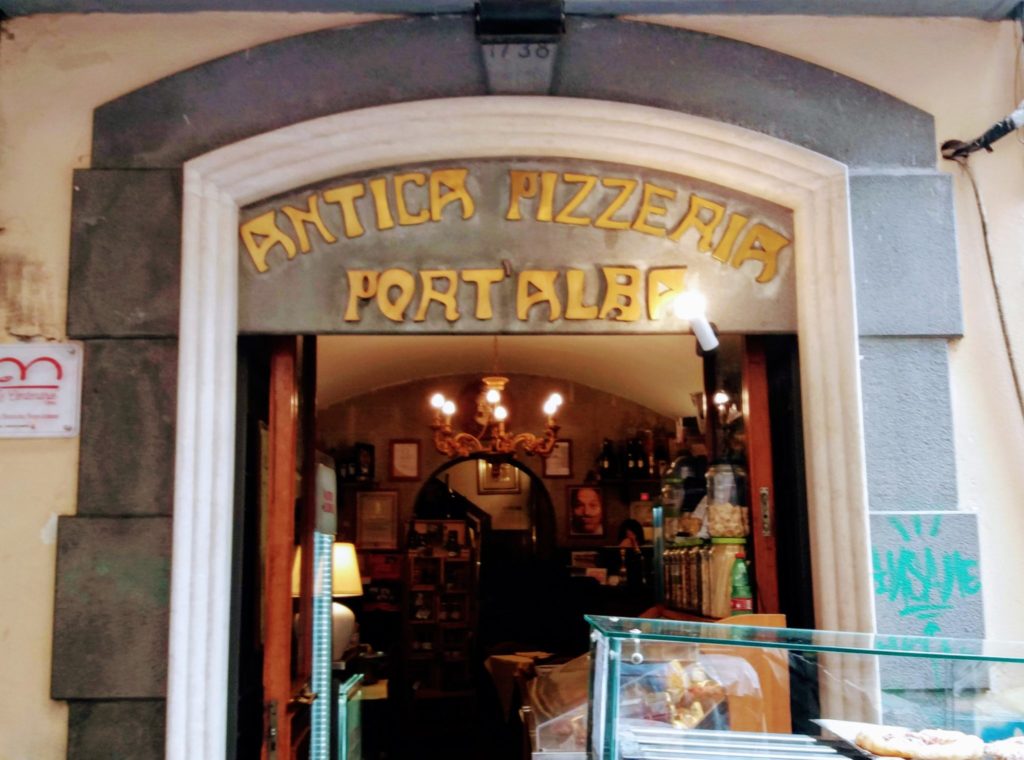 Today Antica Pizzeria Port’Alba is a simple, cosy and a bit old-fashioned place. It is surprisingly not crowded and the service is very fast. The prices are reasonable and you can choose from wide variety of pizzas including the most famous ones. The place is hidden in a quiet street full of bookstands in the heart of Naples. The pizzas are relatively small, perfect for one-person meal and deliciously fresh and crispy. It was a pleasure and honour for us to visit this historic place! 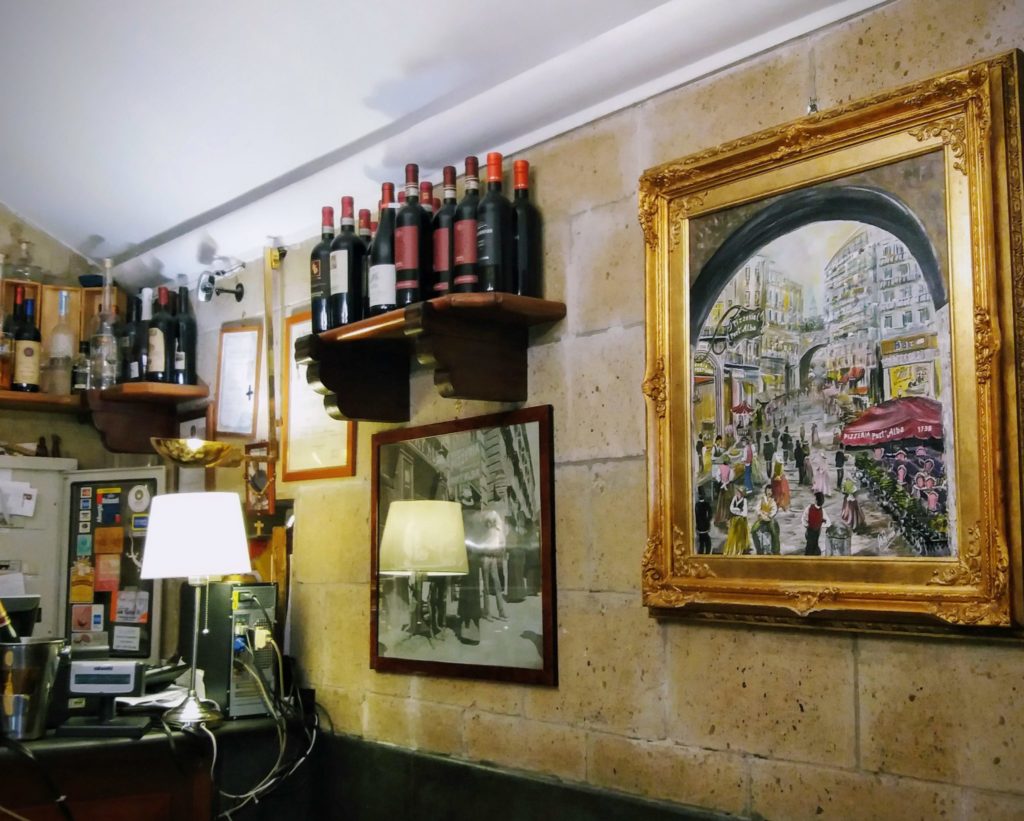 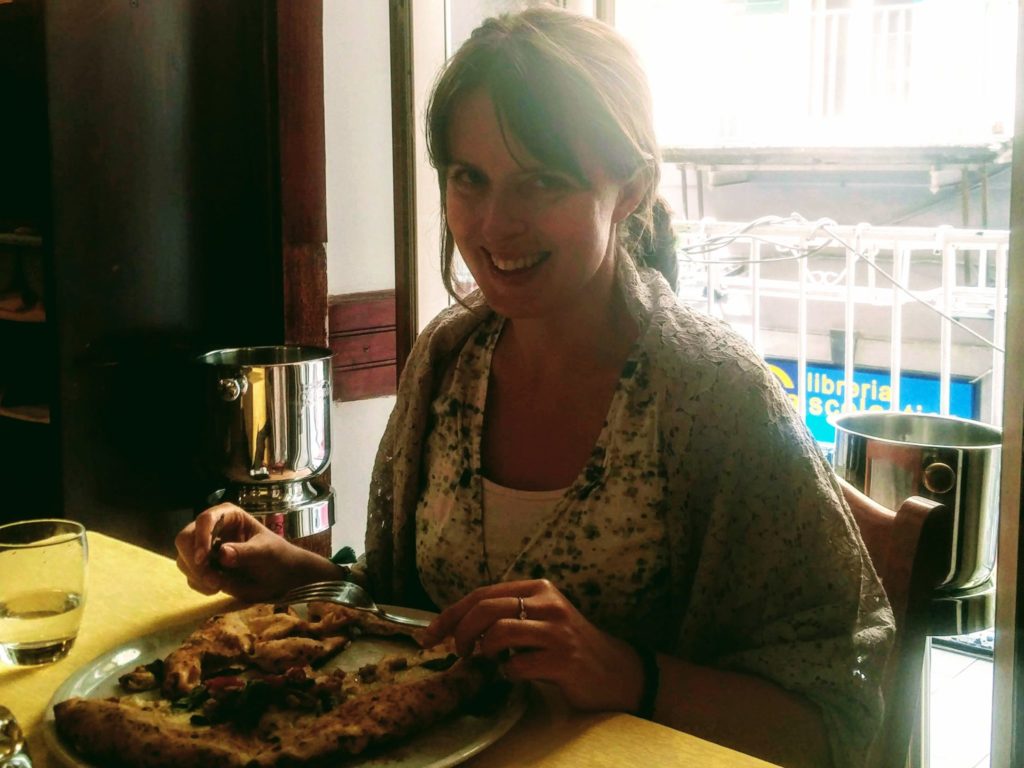 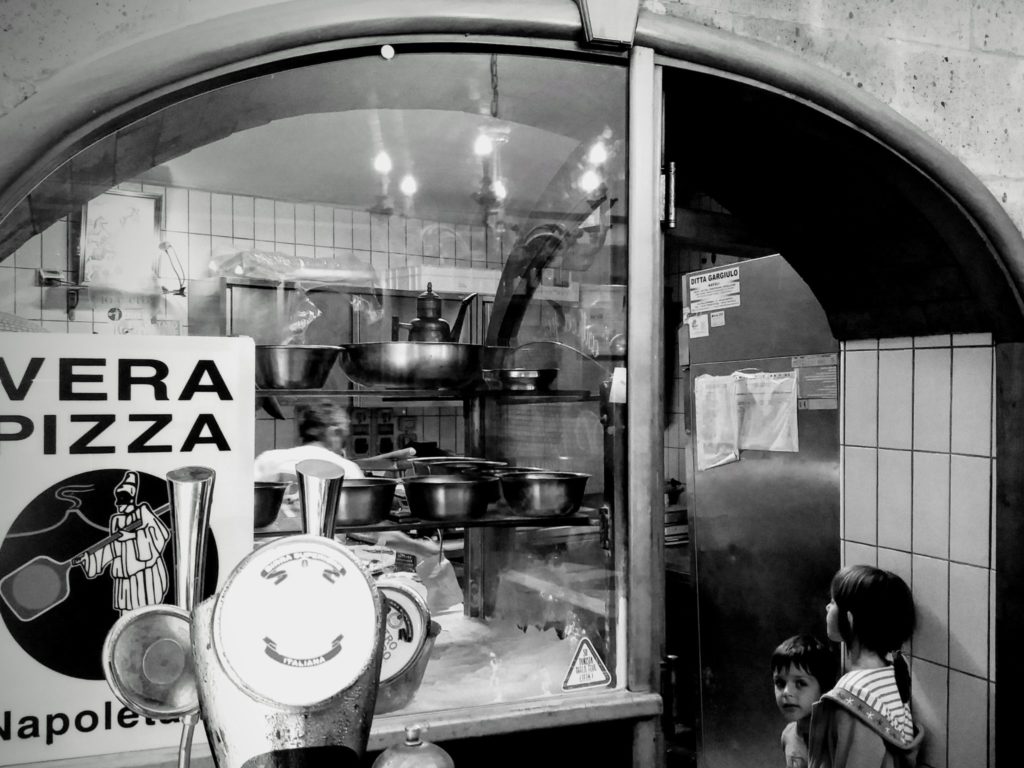 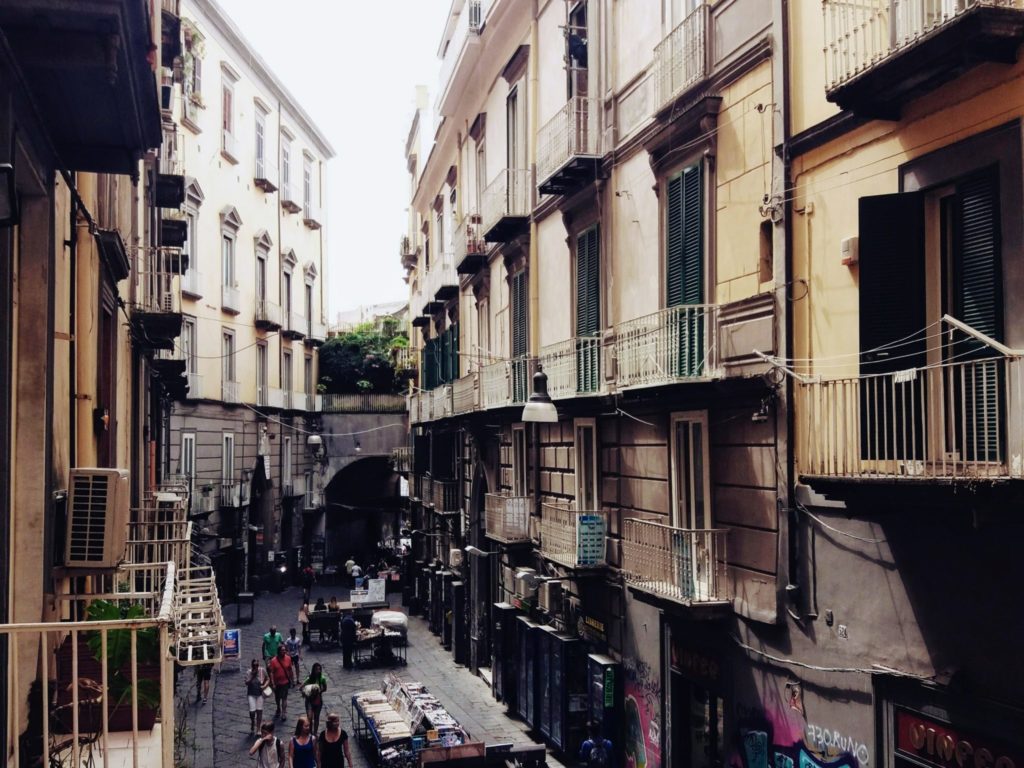 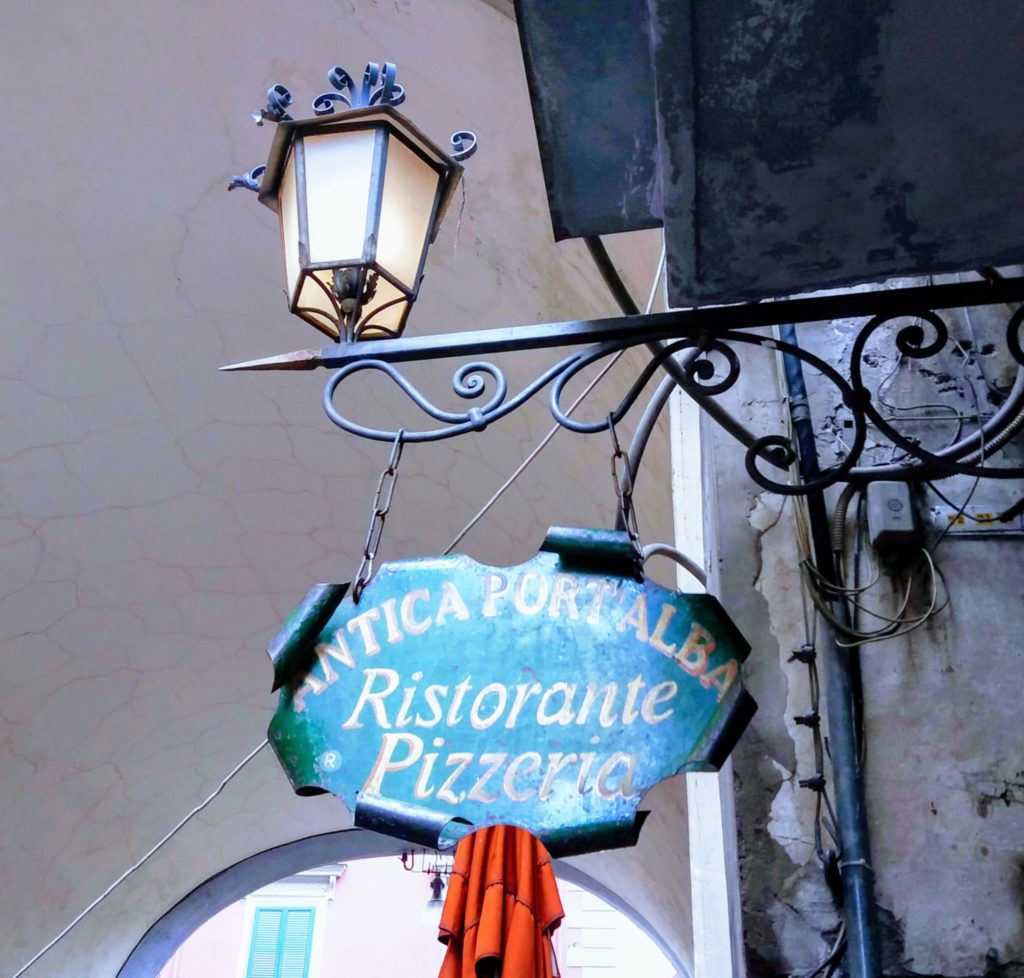 The two following pizzerias we plan to visit during our next trips to Naples:

It was here where the pizza margherita was born created by Raffaele Brandi. The story of this pizzeria is even older than that. The first pizzaiolo, Giovanni Calicchio, started his business in 1760. It was then passed over in a very complicated way from generation to generation and can be found on Salita di Sant Anna di Palazzo 2. The current name and location go back to 1886.

One of the most known and oldest pizzerias in Naples was founded in 1870. On the contrary to pizzerias which serve 1001 types of pizzas, da Michele believes that there are only two true types of pizzas – margherita and marinara. These are the only pizzas they serve.

The most famous pizza in the world – pizza Margherita has been invented by Raffaele Esposito who founded the Pizzeria Brandi.

It is interesting to know that the oldest pizzeria in the world – Antica Pizzeria Port’Alba doesn’t have its own website, but you can read about it in an article on Vintage News.

One of the most known and most famous pizzerias is the Antica Pizzeria Da Michele.

If you want to doubt in the official legend of the creation of the pizza Margherita, then BBC Food might help you.

At the top of The Belfry of Bruges - memories❤ .

The gingerbread houses of Bruges - straight from t

The famous Jewel of Flanders - Bruges. View of the

☘The radiant spring beauty of our garden near B

🌿Tongeren is the oldest Belgian town, founded b