Your dream holiday to France has finally arrived, you want to see all the places you have on your bucket list and have great pics to impress your friends. You come to the places you always heard about and discover that several hundred people have had the same idea and instead of enjoying great architecture and a splendid interior, you are standing for hours next to some sweaty strangers shouting at their kids running around everywhere. You’ve bumped into one of the French tourist traps. Is that how your dream holidays should look like?
I believe you agree with me that this is exactly how they should not. I already wrote a post on how to try to avoid the likelihood of being run over by a crowd of tourists. In this post I will try to convince you that there are good alternatives to tourist traps in France.
I will skip those tourist traps which on top of the crowds offer are simply crappy and focus on those which are famous, good but crowded.

“The most known landmark of the world. Most known tower of Paris. The most packed corner of Paris…”
.
The Eiffel Tower is a landmark without doubt. When visiting the French capital for the first time you have to have a few pictures with it.
This however does not mean that you need to spend hours in the waiting line to climb it. You ought to be aware that when you finally get to the lift, squeeze yourself to the second level platform, you will have pictures of Paris … which do not include the tower 🙂
In brief – our recommendation is that this is a landmark which should be marvelled from a distance. Skip the temptation of climbing it. Use the time saved for doing something more productive and pleasant. The French capital has so much else to offer…
.

“The best known painting in the world.”
.
We all know it. We have seen it hundreds of times. The queues to the Louvre Museum are extremely long in the high season. The queues to the painting are even longer.
Is it really worth to get to the Louvre just for having a look at it? Certainly not! The painting is small, it is always covered with hundreds of tourists and you’ll need to use your elbows to see a small piece of the painting.
The Louvre however is one of the biggest and most impressive museums in the world. If you have time (count half a day at least) and you like art, then do go there. However we certainly recommend you to use your time to see lots of other masterpieces which are neglected by the mass tourists.
Try to buy the ticket online in advance to save time. Think about other less visited parts of the museum. If you are into antiquities see the Ancient Persian “Frieze of the Arches” or the law code of Hammurabi. You prefer renaissance art? Then look for the Autoportrait of Duerer or the sculptures of Michelangelo. If you prefer opulent interiors then the apartments of emperor Napoleon III should certainly be on your list. Louvre has something to satisfy every taste.
.

“This is the most known cathedral in the world. A must see when you are in Paris.”

Well – it’s all true. It is also true that Notre Dame is quite good in managing the crowds, although it does get saturated once in a while.

Alternatives? In Paris you’ve got several magnificent medieval churches to choose from. Our pick would be the nearby Sainte Chapelle which is a masterpiece of late Gothic and its stained glassed windows are among the best in the world. However it does get crowded and queuing is quite often.
And if you want to fool your friends and show them pictures from Notre Dame Cathedral, you could go to the town of Soissons (60 km north of Paris) which has a medieval original copy of Notre Dame in Paris. It is nearly as old as the Paris original and the amount of tourists is negligible.
Last but not least – remember that France is a country full of magnificent cathedrals. Here I’d like to only name a few like Chartres (famous for its set of stained glass windows), Beauvais (the highest-vaulted gothic cathedral in the world -48 meters), Rouen (immortalised by Monet in a series of his famous impressionist painitings) and Strasbourg (stunning pink facade, rose window and tower). They are all absolutely worth visiting so try to plan a visit outside of the French capital!
.
.

“The most famous palace in the world, the most magnificent personification of power, the most splendid gardens” vs “The most crowded palace, the longest queues…”
.
When I was visiting Versailles in August some years ago, I first found a crowd of 400 people queueing to the ticket booth. Afterwards I could only admire the ceilings and the bed tops, as all the other elements located lower were totally invisible due to the huge crowd. I must admit I did not have the best memories of the visit. This is very likely you will see Versailles too. So – why hassle? Just for the sake of having ticked it off your bucket list?
Not many know that Versailles was not the only Royal Palace in the outskirts of Paris. The French kings had two others – Compiegne and Fontainebleau.
Compiegne was more a hunting lodge (we are talking of French scale, where the hunting lodge is bigger than royal palaces in several other countries). Compiegne on the contrary to Versailles became also the favourite palace of Napoleon. Thus on top of the royal rooms Louis XIV and Louis XV style, you can also admire the very different rooms from the early 19th century. The amount of tourists visiting Compiegne is significantly lower than Versailles, so you can actually see the rooms, have time to enjoy the, and have a really memorable time.
The other palace – Fontainebleau – is huge. It is royal and it is magnificent. It is nearly impossible to visit the whole of it in one visit. You have enormous amount of breathtaking interiors. And the amount of tourists is 95% less of what Versailles has (300 thousand compared to 7.5 mln). The gardens of Fontainebleau are considered at least equal to the ones in Versailles. On top of that, just like Versailles, it is situated around 30 km out of Paris (opposite direction though).
So, if you want to see a French royal palace and enjoy it and you are less visiting a name of a palace, then go for either Fontainebleau or Compiegne. If royal is not the crucial part of the description, then the palace of Chantilly is also a great option. It belonged to the Conde family, which were cousins of the royal Bourbons. The families competed in refined taste and opulence until the moment that one of the Conde family members stood against the king and his head rolled down the streets of Toulouse…
. 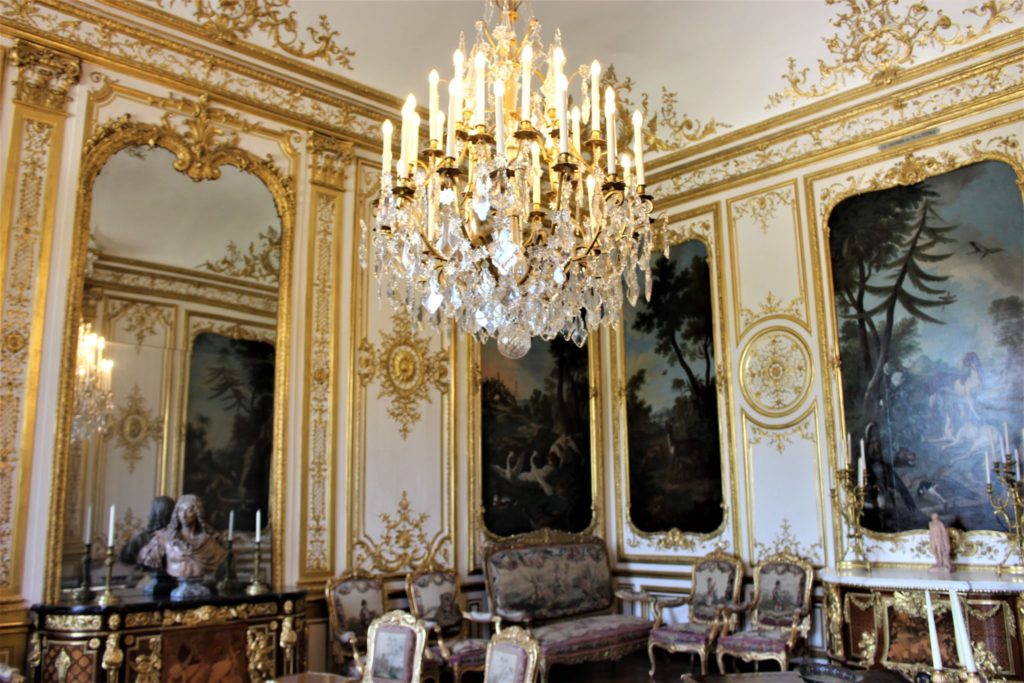 “The archetype of a medieval monastery on a small remote island.”
.
The last two adjectives should give you some hints – it was planned to be small and remote. It wasn’t planned to cope with dozens of buses daily.
I can sincerely tell you that this is one of the places that looks best seen from afar. Do come here, stop on the shore and make dozens of pics. Skip trying to squeeze in the narrow medieval streets packed with touristic restaurants and even more touristic shops while winding up with the never ending crowds towards the gates of the monastery. You won’t see much and even if you would want to quit and flee, it will be impossible, as the crowd will push you further and further.
If you want to see splendid medieval monastic interiors, France has enormous amount of alternatives. Abbey de Montmajeur which we described on our blog is a good example. If you prefer something closer to Paris, try Abbey de Royaumont which is a good alternative. It is insanely picturesque and semi-empty, so you can feel the spirit of medieval monastic life.
. 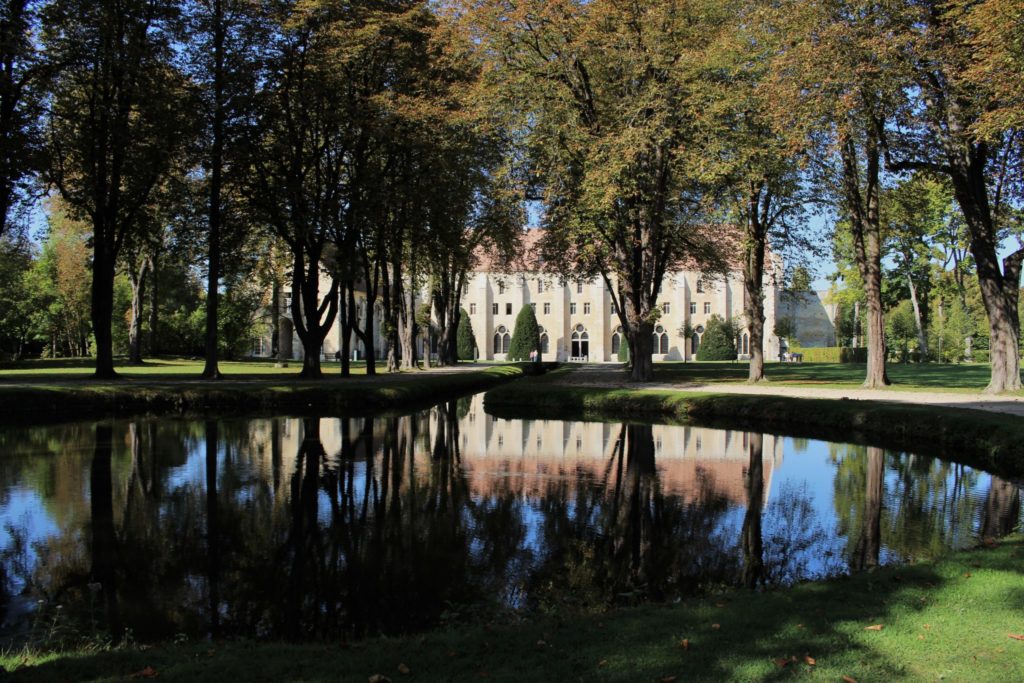 “The most beautiful medieval city in the world with the biggest and most splendid city walls in the world.” vs “The most crowded place in south-west France.”
.
Carcassonne is another landmark. The beautiful medieval city walls surrounding a perfect medieval town located on a high hill crowned with a cathedral and a castle. Perfect? Well, indeed it is too perfect. So perfect, that you ought to know that it is fake. Original Carcassonne never looked like that in the medieval times. It is true that the town of Carcassonne was never captured and destroyed, but it got neglected and dilapidated throughout centuries. It was rediscovered in the second half of 19th century when the French started looking back into their history and rediscovering their forgotten gems. The person who did it was Eugene Violet le Duc who was a huge fan of medieval history. He got a green light to rebuild Carcassonne. And that’s what he did. You ought to know that he was quite creative and made it way more pleasant to the eye than it had ever been. That’s why it is so beautiful and picturesque.
You should know that this is not the most complete medieval town in Europe. Conwy in Northern Wales has longer and more complete city walls and historic Old Town and castle. The amount of tourists in Conwy is incomparably smaller and you can enjoy it much more (Carcassonne wins in the weather department though).
If you are in the neighbourhood of Carcassonne and you love medieval history, do a Cathar trail and discover the breathtaking castles hidden in the Pyrenees, the powerful medieval monasteries (Abbey de Fontfroide is one of the examples) which stood behind the crush of the Cathar movement. Splendid, worth seeing and significantly less crowded than the tourist trap called Carcassonne.

What are your stories with the French tourist traps? Are there anything you could recommend to fellow travellers?
……..
Did you like our post? If so, pin it!