Saxony is one of the most beautiful parts of Germany. It is rich in cultural and historic heritage, unique landscapes and great nature. Unlike Bavaria, it is usually avoided by foreign tourists, which is in our opinion, a big shame. Let us show you a few Saxon gems about which we will be writing about in the future blog entries in detail.

Dresden is the capital and the heart of Saxony. It is majestically located on the Elbe river and thanks to the Wettin dynasty it has been transformed into one of the most impressive cities of the late 17th and early 18th century Europe. The Semper Opera house, the Zwinger Palace and the Frauenkirche are the landmarks of one of the most remarkable German cities. The city survived a deadly bombing in 1944 but after the reunification of Germany the landmarks have been meticulously rebuilt. We have a special feeling towards Dresden, as it is linked to the beginnings of our relationship and the founding of our family.

On the contrary to Dresden, this city is nearly unknown to tourism, even though it has all that a touristic place ought to have. It has a nice old town, a few magnificent churches, a bustling zoo, and on the outskirts a battlefield of one of the most important battles in the history of mankind (the Battle of Nations in 1813). To mark the importance of this battle, in its centennial, the biggest concrete monument in the world has been built.

When you think of Meissen you should have one connotation in mind: porcelain. It was here in 1710 that the first porcelain in Europe was made. The porcelain of Meissen is among the most expensive and the most beautiful in the world. Everything in this city is connected with porcelain – even the church bells are made of porcelain. If you love exquisite porcelain prepare your wallet and your credit cards too, as Meissen porcelain can be splendid, but it cannot be cheap.
Meissen is also a beautiful old town situated on the Elbe river with an impressive castle overlooking the town. It is certainly worth visiting and recommending it to others.

When you arrive to Bautzen you just drop your jaw and say: “Wow! Why haven’t I heard of this place before?” Its old town is majestically located on a steep hill with the church towers and competing with them city wall towers skyrocketing the horizon. It looks like a film location or an ideal city from a miniature railway model. Stroll along the streets and discover what the over 1000 years old town has to offer.

If you prefer more spooky places, then head towards the most reknown political prison of East Germany, where all the political prisoners of the communist regime were kept.

The most famous and unusual ruler Saxony had was king August the Strong who lived in the 18th century. If he lived in our times, he would compete in the strongman championships; back then he lifted heavy things and broke horseshoes barehanded. He was also a reknown lover who could put Casanova to shame. One of his most famous mistress was Countess Cosel. Once his love ended in 1713, he sent her to the castle of Stolpen, where she was placed under house arrest. The unlucky woman did not leave the castle for 49 years.

You can visit this unique castle and see the place of her solitude. If you want to know more about her, we recommend you a good novel about her written by Jozef Ignacy Kraszewski “Countess Cosel”. There is also a movie based on a novel.

If you are a fan of the Second World War, then Torgau is a place for you. It was here on 25 April 1945 that the American and the Soviet Red Army met on the banks of the Elbe River. There is a special trilingual monument dedicated to this event.
Apart from that Torgau is a pleasant town with a nice old town and an interesting castle. Worth adding to your Saxon trip especially if you are coming to Saxony from the direction of Berlin.

The legend says that the German emperor was looking for a name for his new town on the Dollnitz river. He asked his wife, but the empress was not paying attention and just replied “oh Schatz” (meaning “oh dear” in German) and that’s how the name of the place came into being.
It is a cosy and picturesque town off the beaten track with all that you expect from a historic European city – a nice market square, fine renaissance Town Hall and lots of good places to eat.

Loebau is yet another pleasant town in the land of Saxony. It’s particularity is however, the Schminke House. This is a villa built in the 1933 by a world renown architect Hans Scharoun for the Schminke family. It is one of the most important houses of the Modernist Movement and even today it looks like a dream villa. The refined house is considered as an architectural icon. Another structure worth visiting in Loebau is the King Friedrich August Tower. This is the tallest cast iron tower in Europe which offers splendid views on the nearby mountains.

A small village close to the Czech border which in many countries would be considered an open air museum. We were amazed to discover that over 250 of its houses are post-and beam constructions which is unique in the world. Another specificity of the village are the granite doorsteps and vaulted windows of its houses. The village looks like a perfect film location and indeed it has played in many German film productions. 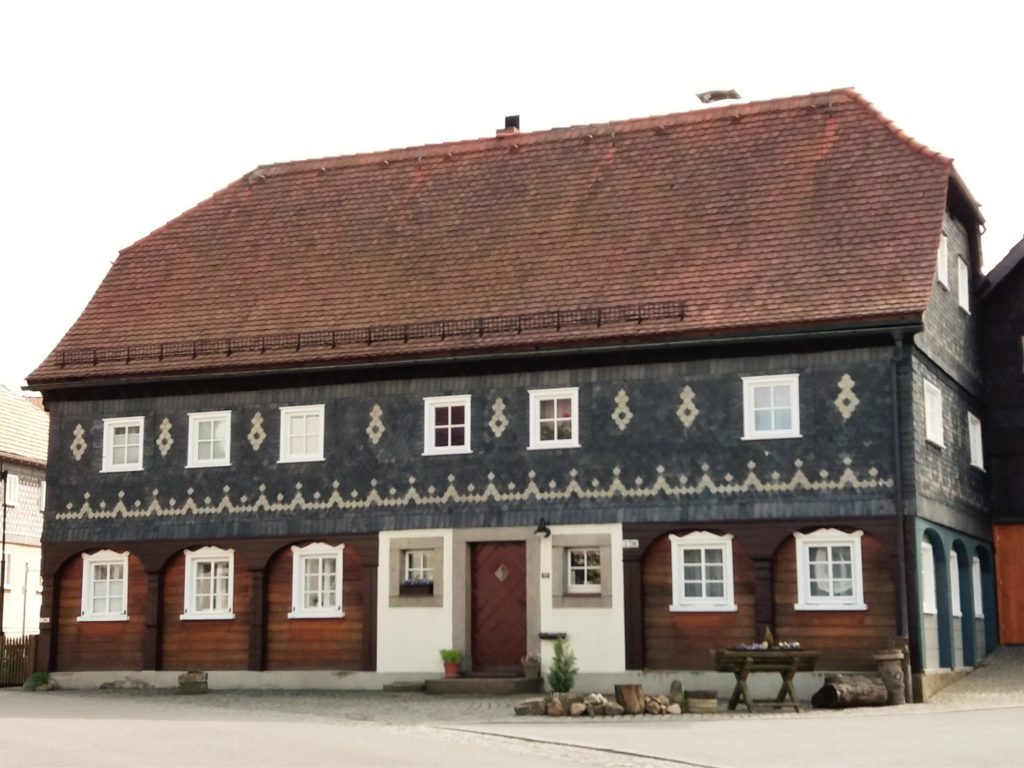 The size of the houses shows the richness of its inhabitants.

It is a majestically located town in the Ore Mountains (known in German as Erzgebirge). The town was always connected with mining – tin, silver and cobalt, which gave it wealth. Mining ceased after first world war, but in medieval times it gave the town the resources to build a true gem – a very late gothic church of Saint Anna, which is considered as one of the best gothic masterpieces of Central Europe. If that doesn’t convince you to visit the place – then skiing in winter and mountain hiking in other seasons should do the trick.

If you are entering Saxony from Bavaria, probably the first town you will see is Plauen. It has been added to the Kingdom of Saxony only in 1806., thus it has a mixed style of a town on the crossroads of many regions. It is worth noting that the first mass demonstration against the communist regime in the East Germany began in Plauen on 7 October 1989. This was the beginning of a series of mass demonstrations across the country which ultimately led to the re-unification of Germany in 1990.

This town is currently split between Germany and Poland along the Neisse river. In Poland it is called Zgorzelec. The historic center lies on the German side. You ought to know that historically speaking Goerlitz is not a Saxon town. It belongs to the neighbouring region of Silesia. However for administrative reasons since 1945 it belongs to the land of Saxony.
It has a very pleasant old town which has been well restored and is certainly worth a stopover.

And what about you? Have you ever visited Saxony? What are your thoughts about it? Would you recommend it to others? If yes – to which types of travellers?