To understand Polish cuisine one has to know a bit about Polish history. Long story short – Poland was always either under occupation or very multiculti. That means Polish dishes are an amazing composition of different cultures. From East – Tatar, Turkish and Mongolian, Russian and Ruthenian to West – German, French, Italian and Jewish. Yes, we have it all. Here are unique Polish dishes you have to try!

You wrap unleavened dough around a savoury or sweet filling and cooking in boiling water. Pierogi is a popular dish in Eastern Europe. But boy, Poles love their dumplings. We eat them on Christmas, in Summer with fruits or Winter with potatoes and white cheese (salles Russian dumplings). In Autumn with meat or mushrooms (or pickled cabbage and mushroom) and in Spring with spinach. You can put almost anything inside. It has a special shape.

Kisiel, popular in The East, is fruit juice thickened with cornstarch, potato starch or arrowroot. Great Summer dessert. Kompot is just fruits that have been boiled. We drink kompot with or without fruit. On Christmas, we make kompot from dried fruits with cinnamon.

Funny thing- we have white and red borscht, the same colours as our flag. But it is totally different.

Red borscht is made of beetroot. We eat it with potatoes or croquet or hard boiled eggs or little dumplings called „ears”. Yes, it looks like little ears. Special barszcz is a Christmas dish.

On the other hand white borscht is an Easter dish. With white sausage and hard boiled egg and potatoes.

Imagine it’s cold, cold Winter with loads of snow. You were outside and feel frozen (just like Great Winter Elsa way ;). You come back Home and feel this special smell. Cooked pickled cabbage (sauerkraut) with sausage, meat. Hot,  good and nutritious.

In Poland cows are important. But not as much for meat as for milk.  We have several products made of milk and stuff.

Zsiadłe mleko – curd – is made from none pasteurised milk that is off.

Kefir is similar to yoghurt but more fluid and made with different kind of bacteria.

Maślanka – buttermilk- as you guessed, it is milk that you use to make butter and then have some leftovers.

Take a cabbage leaf and roll it with meat and Rice. You made yourself a dove. This Polish dish from Balkans is also made with vegetables. Probably the name comes from the look of the dish – rolls might look like a dove. But to see it you have to drink a lot of vodka 😉

Special Silesian dish (region in Southern Poland). Rolled (we do roll a lot and not sushi 😉 beef with pickled cucumbers, onion and some other stuff and to this roulade add special dumplings with a small hole. Finish the dish with red cabbage with wine (sometimes onions). Silesia is a land of mines – they love their Sunday dinner with “nudlezupa” (noodle soup, broth in Silesian language) and rolada.

During the carnival (time between Three Kings day and Tuesday before Ash Wensday) in Poland we like to eat Faworki (often called also “chrust” which means brushwood). But don’t worry! It’s not made of wood 😛

Polish Chrusciki or Angel Wings are just pastry made of dough in shape of a ribbon usually sprinkled with powdered sugar. It’s deep fried and probably has like a zillion calories, but you MUST try it. Sure, you can find similar stuff around the globe (in an example in France around Mardi Gras or Verhuny in Ukraine), but Polish is the best. Period.

Funny story… Faworki was the name of the ribbons given to knights from their ladies (from word “faveur” – the French word for a favour). But how this element of cloth became great pastry remains a mystery.

As you might notice in Poland there are some cold winters. Well, they were, as people had fewer clothes and worse houses as they had been a serf or other peasant. You have cabbage and cucumbers, but winter is cold, you need more vitamins and make sure your food won’t rotten in rather hot summers – what do you do? Pickle.

Some water, vinegar, sugar (no kidding), salt and veggies you want to pickle, add some time and THA DA! A bit sour cucumber or cabbage is ready to be eaten or used in other dishes (like rolada or bigos). Those veggies can be eaten also independently.

I told you cows are important. We also take their tripe and put them in soup (called also flaki/tripe) or in other dishes. Chicken noodle soup or more of a broth is a great way to eat tripe. This soup is more popular in Warsaw – Poland’s capital – but tripe are also part of other dishes in different parts of the country. They look like noodles, taste nothing like them and are really hard to make eatable. Or is it just me? 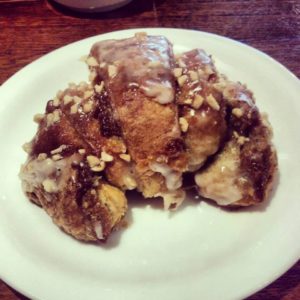 This amazing pastry is… just amazing 😉 It’s a special kind of dough that we eat around 11 November – the Independence Day. Mostly in Poznań (Western Poland), but can be spotted elsewhere. This kind of croissant is made of nuts, white poppy, raisins and some candied fruits. Some are big (more than palm hand) others are small like an avocado. The size doesn’t matter since you will too soon get to the point that you really would love to eat more, but can’t. This twirl is really filling your belly too quickly!

Keen on trying out some snacks? No problem! Just watch the funny video of teens trying some Polish delights and learn more about the Prince Polo, Sezamki or Makowiec (pronounced really badly in the movie).

Those my dishes and what’s yours? Share in comments!